Give, if you know what’s good for you 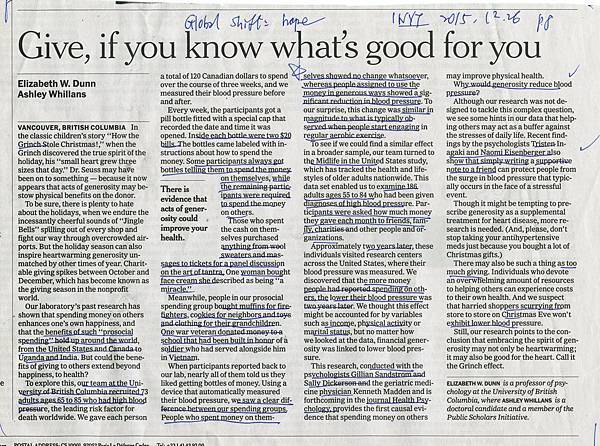 Vancouver, British Columbia — IN the classic children’s story “How the Grinch Stole Christmas!,” when the Grinch discovered the true spirit of the holiday, his “small heart grew three sizes that day.” Dr. Seuss may have been on to something — because it now appears that acts of generosity may bestow physical benefits on the donor.

To be sure, there is plenty to hate about the holidays, when we endure the incessantly cheerful sounds of “Jingle Bells” spilling out of every shop and fight our way through overcrowded airports. But the holiday season can also inspire heartwarming generosity unmatched by other times of year. Charitable giving spikes between October and December, which has become known as the giving season in the nonprofit world.

Our laboratory’s past research has shown that spending money on others enhances one’s own happiness, and that the benefits of such “prosocial spending” hold up around the world, from the United States and Canada to Uganda and India. But could the benefits of giving to others extend beyond happiness, to health?

To explore this, our team at the University of British Columbia recruited 73 adults ages 65 to 85 who had high blood pressure, the leading risk factor for death worldwide. We gave each person a total of 120 Canadian dollars to spend over the course of three weeks, and we measured their blood pressure before and after.

Those who spent the cash on themselves purchased anything from wool sweaters and massages to tickets for a panel discussion on the art of tantra. One woman bought face cream she described as being “a miracle.”

Meanwhile, people in our prosocial spending group bought muffins for firefighters, cookies for neighbors and toys and clothing for their grandchildren. One war veteran donated money to a school that had been built in honor of a soldier who had served alongside him in Vietnam.

When participants reported back to our lab, nearly all of them told us they liked getting bottles of money. Using a device that automatically measured their blood pressure, we saw a clear difference between our spending groups. People who spent money on themselves showed no change whatsoever, whereas people assigned to use the money in generous ways showed a significant reduction in blood pressure. To our surprise, this change was similar in magnitude to what is typically observed when people start engaging in regular aerobic exercise.

To see if we could find a similar effect in a broader sample, our team turned to the Midlife in the United States study, which has tracked the health and lifestyles of older adults nationwide. This data set enabled us to examine 186 adults ages 55 to 84 who had been given diagnoses of high blood pressure. Participants were asked how much money they gave each month to friends, family, charities and other people and organizations.

This research, conducted with the psychologists Gillian Sandstrom and Sally Dickerson and the geriatric medicine physician Kenneth Madden and is forthcoming in the journal Health Psychology, provides the first causal evidence that spending money on others may improve physical health.

Why would generosity reduce blood pressure?

Although our research was not designed to tackle this complex question, we see some hints in our data that helping others may act as a buffer against the stresses of daily life. Recent findings by the psychologists Tristen Inagaki and Naomi Eisenberger also show that simply writing a supportive note to a friend can protect people from the surge in blood pressure that typically occurs in the face of a stressful event.

Though it might be tempting to prescribe generosity as a supplemental treatment for heart disease, more research is needed. (And, please, don’t stop taking your antihypertensive meds just because you bought a lot of Christmas gifts.)

There may also be such a thing as too much giving. Individuals who devote an overwhelming amount of resources to helping others can experience costs to their own health. And we suspect that harried shoppers scurrying from store to store on Christmas Eve won’t exhibit lower blood pressure.

Still, our research points to the conclusion that embracing the spirit of generosity may not only be heartwarming; it may also be good for the heart. Call it the Grinch effect. 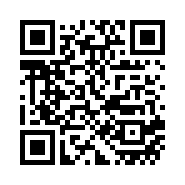