瀏覽方式： 標題列表 簡短摘要
He is very honest, and says bluntly what most have already known.
However, the factors he ignores are
1. China is evolving spiritually besides materially. Xi Jinping is not an atheist, and so are Li Keqiang, Ma Kai....(not to mention Hu Jintao, Jiang Zemin......)
2. Taiwan has its strength in the society which provides a catalyst to slowly and gardually transform the nature of the hegemon China.
3. The 21st century differs from the past in that economics takes command, and people's satisfaction ultimately decides the survival of a regime, either democratic or non-democratic (e.g. The former Soviet Union)
Chong-Pin Lin  February 26, 2014
這是一篇震撼台灣的觀察。
現實主義大師非常誠實，說了許多我們已知道的趨勢。
依我淺見，他或許忽略了至少三個因素(詳見以下英文留言)。
簡單說： 1.中國在演化，不只物質上，心靈上也是。習李皆非無神論者。
2.台灣的強項是社會，將有催化劑的作用。
3. 21世紀不同於以往在於經濟掛帥，人民滿意度決定政權最後的存廢。君不見前蘇聯如何突然崩潰?
林中斌  2014年 2月26日 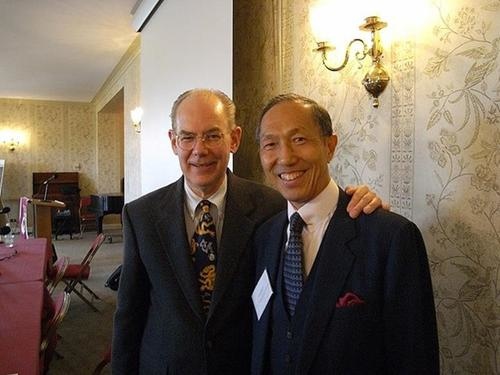 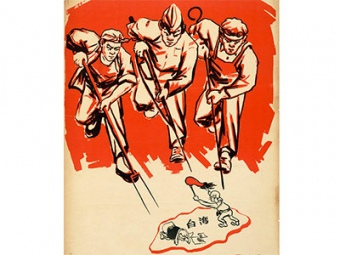 ▲top
這是一篇平衡客觀的分析。它批判了以“美國為中心”的觀點。作者在美國教書，所以也可安全的點出俄國人傳統的侵略行為的思想根據。他最後的建議超越了狹隘的以“國家利益”為正當理由的觀念。
林中斌  2014年3月6日
This is a balanced analysis of the Crimean situation, quite different from the U.S.-centered view of the world. Yet the author teaches in the U.S. and can point out the aggressive tradition of the Russians as well.  His final suggestion transcends the confines of the fashionable “national interest” justification of all state behaviors.
Chong-Pin Lin March 6, 2014
Crimea, the Tinderbox
By CHARLES KING   New York Times MARCH 1, 2014
http://www.nytimes.com/2014/03/03/opinion/crimea-the-tinderbox.html?hp&rref=opinion&_r=0  accessed March 7, 2014

The United States typically interprets its own actions through the lens of its principles. It reads the principles of other countries from their behavior. In most instances that leads to precisely the hypocrisies that Russia, China and other countries find so easy to condemn.

The Crimean affair is a grand experiment in Mr. Putin’s strategy of equivalence: countering every criticism of his government’s behavior with a page from the West’s own playbook.
(繼續閱讀...)

“北京將與達賴恢復接觸。”這是我在2012年10月31日聯合報名人堂“習近平與佛教”中所寫。但是我當時並不知道5天前印度報紙已登載習近平已在8月26日派人去德蘭沙拉見達賴。以下是那篇印度的報導。報導中蕭武南與大寶法王照片，來自蕭武南自己部落格，是他回北京後貼的。據進一步查證，蕭當時並不一定帶了習近平的信，但是他在德蘭沙拉時，口氣友善、樂觀、但不自誇，只是想瞭解德蘭沙拉方面的想法。這點與其他不少來自北京號稱代表某某領導的訪客完全不一樣。他應該是真正北京派來的人物。
“Beijing will resume contact with Dalai Lama” so wrote I in the October 31, 2012 oped entitled “Xi Jinping and Buddhism” in United Daily News. I, at the time, did not know that 5 days ago, an Indian news source had already published a report (see the following posting)revealing that Xi Jinping sent an envoy to Dharamsala to contact Dalai Lama on August 26. My further investigation suggests: Mr. Xiao Wunan might not have carried a letter from Xi Jinping to Dalai Lama, but he was courteous, optimistic, somewhat vague, intent on learning what Dharamsala’s thinking was, and did not claim to represent anyone important in Beijing which set him apart from many other namedropping visitors from Beijing who claimed to represent certain VIPs in Beijing. That made him look more like the real emissary.

A concerned dragon: China fresh overture to Tibetans
Jayadeva Ranade | Agency: DNA | Friday, October 26, 2012
http://www.dnaindia.com/analysis/column_a-concerned-dragon-chinas-fresh-overture-to-tibetans_1756196
As China prepares to usher in a new leadership at the 18th Party Congress scheduled to open in Beijing on November 8, there is mounting concern in senior echelons of the Chinese Communist Party (CCP) at the rising resentment in the ethnic Tibetan minority.

Particularly worrying would have been the self-immolation on October 15, by the grandfather of the 10-year old Beijing-recognised VIIth Gungthang Rinpoche, which highlights the strained relationship between Tibetans and Communist authorities. A new feature is that recently thousands of Tibetans, disregarding heavy armed police presence, assemble at sites of the self-immolations to pray for the deceased and mark the spot. 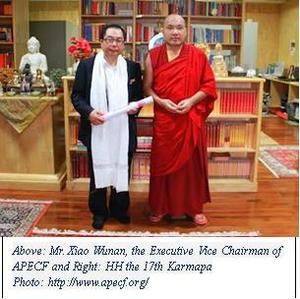 In a recent apparent bid to ease these tensions, Chinese authorities quietly sent an emissary and contacted Tibetan leaders in Dharamsala. Thinly cloaked as a venture of ‘Asia Pacific Exchange and Cooperation Foundation’ (APECF), a Chinese government-sponsored NGO manned by Chinese Communist Party (CCP) cadres, the initiative seeks to revive plans to consolidate and expand China’s presence in Nepal and ingress India and its border regions, ostensibly by encouraging Buddhist tourism in Lumbini in Nepal. At least one executive director of APECF has links to China’s military establishment.
Xiao Wunan, a senior CCP cadre and executive vice president of APECF visited India and was received in Dharamsala on August 16 by the Dalai Lama, Lobsang Sangay, then ‘Kalon Tripa’ (prime minister) of the Central Tibetan Administration (CTA) and Ugyen Thinley Dorjee, who is formally approved by the Dalai Lama and Beijing as the XVIIth Gyalwa Karmapa, or head of the Karma Kargyu sect. Xiao Wunan was accompanied by Gong Tingyu, a Deputy Secretary General of APECF and Simon Kei Shek Ming, reportedly a journalist of the Hong Kong magazine Yazhou Zhoukan.

During his meeting with the Dalai Lama, Xiao Wunan probably carried a personal message from a senior Chinese leader, possibly Xi Jinping. He could have informed the Dalai Lama that he was welcome to spend his last days in Beijing provided he gave up ‘anti-China’ activities and expressed support for the Communist regime.

Xiao Wunan’s meeting with Lobsang Sangay, elected head of the CTA, is significant. It suggests Beijing may be willing to talk to its representatives. Lobsang Sangay is also ‘known’ to the UFWD for facilitating contacts between Chinese academics and the Dalai Lama. Coincidentally, within a month of the meeting the designation of the Head of the Central Tibetan Administration (CTA) was changed from ‘Kalon Tripa’ (or prime minister) to the less controversial — from Beijing’s perspective —’Sikyong’ (or political leader).

Xiao Wunan also visited Nalanda when he met officials of the proposed university and assured financial assistance. In Delhi he met officials in the Ministries of Culture and Tourism. Returning to Kathmandu, Xiao Wunan disingenuously announced that APECF now has the support of the Government of India and would be organising three and four-day package tours for Buddhist pilgrims travelling from Lumbini to India
.
Interestingly, Xiao Wunan separated from an official Chinese delegation visiting Kathmandu to visit India. The Chinese delegation included Zou Lanming, vice general manager of the Lanzhou-based China Railway 21st Bureau. Xiao Wunan’s presence could suggest China plans to extend the railway from Xigaze to possibly Lumbini, on the border with India. A month later Xiao Wunan announced that APECF had signed an MoU with UK’s Vertical Theme Park (VTP) Group for a Lumbini Cloud Tower project, with the Nepal Government’s approval.
Nepal’s My Republica on October 11, reported the Nepal Ministry of Culture, Tourism and Civil Aviation’s denial that it was aware of any deal to develop Lumbini as an ‘international peace city’. Prachanda, leader of the Unified Communist Party-Marxist Leninist (UCP-ML), however, continues to be a vice president of APECF.

Meanwhile the CCP’s policy governing Tibetans, of combining economic incentives with intense political persuasion, remains unchanged. In an unusually candid interview to the Party mouthpiece People’s Daily on September 21, 2012, Chen Quanguo, party secretary of the Tibet Autonomous Region (TAR), enumerated the economic benefits extended to the people of Tibet. Disclosing measures to ensure ‘social stability’, he listed that 21,804 cadres had been sent to work in 5,451 administrative villages, that the Party had compiled complete sets of files and that 698 police stations had been established. All monasteries and temples now have photographs of the ‘four leaders’ (Mao Zedong, Deng Xiaoping, Jiang Zemin and Hu Jintao), the national flag and a copy each of the People’s Daily and Tibet Daily. A project has also been started to ‘cultivate’ 100 senior monks and ‘guide’ Tibetan Buddhism to ‘adapt itself to socialist society’.

The author is a former additional secretary in the Cabinet Secretariat, Government of India
(繼續閱讀...) 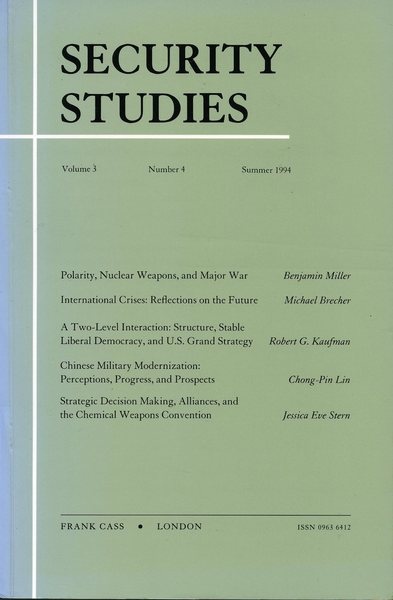 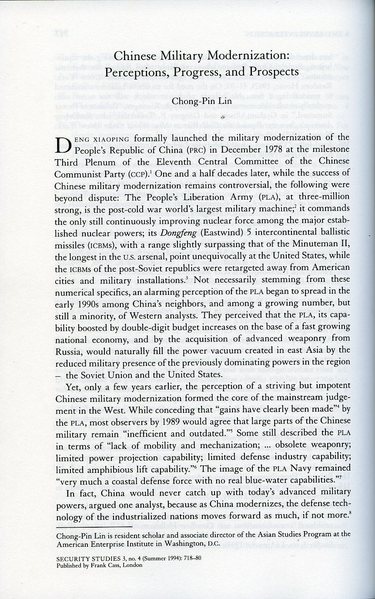 Chong-pin Lin:“The Role of the People’s Liberation Army in the Process of Reunification: Exploring the Possibilities” 1993 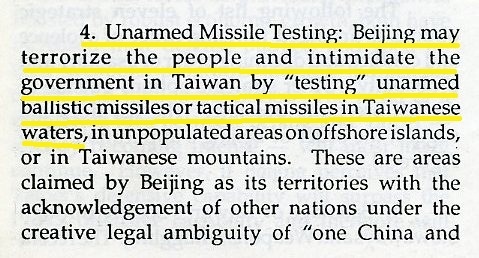 Chong-pin Lin:“The Role of the People’s Liberation Army in the Process of Reunification: Exploring the Possibilities” China's Military: The PLA in 1992/1993 (Boulder, Colorado:Westview, 1993)  p.170. 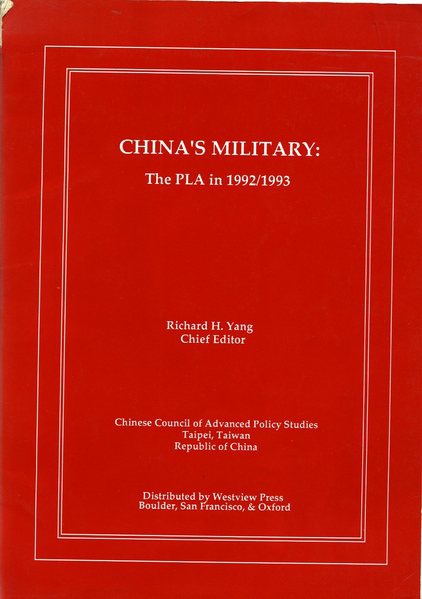 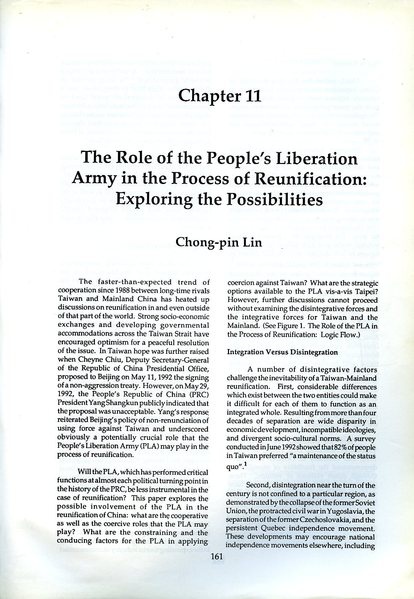 Chong-pin Lin:“The Role of the People’s Liberation Army in the Process of Reunification: Exploring the Possibilities” China's Military: The PLA in 1992/1993 (Boulder, Colorado:Westview, 1993) pp.161-179. 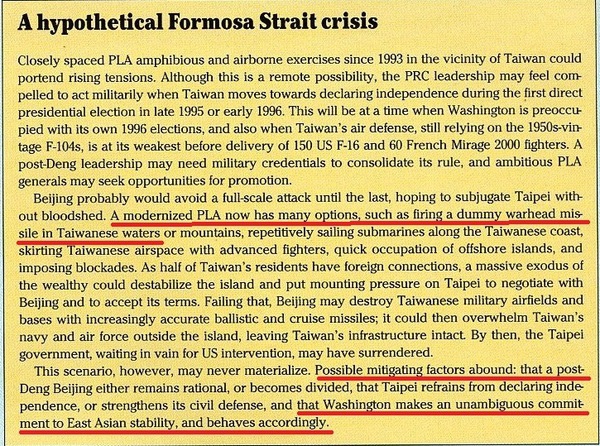 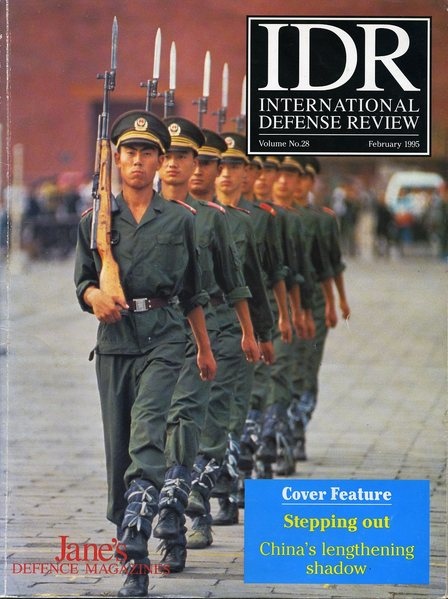 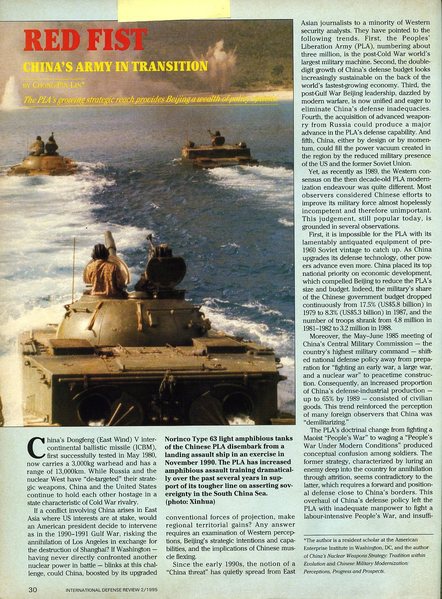 ▲top
INSIGHT-Does China's next leader have a soft spot for Tibet? By Benjamin Kang Lim and Frank Jack Daniel

BEIJING/DHARAMSALA, Aug 31, 2012 (Reuters) - For decades, Beijing has maintained that the Dalai Lama is a separatist, but Tibet's exiled spiritual leader once had a special relationship with the father of Xi Jinping, the man in line to become China's next president.

Few people know what Xi, whose ascent to the leadership is likely to be approved at a Communist Party congress later this year, thinks of Tibet or the Dalai Lama.

But his late father, Xi Zhongxun (習仲勛), a liberal-minded former vice premier, had a close bond with the Tibetan leader who once gave the elder Xi an expensive watch in the 1950s, a gift that the senior party official was still wearing decades later.

The Dalai Lama, 77, recalls the elder Xi as "very friendly, comparatively more open-minded, very nice" and says he only gave watches back then to those Chinese officials he felt close to. 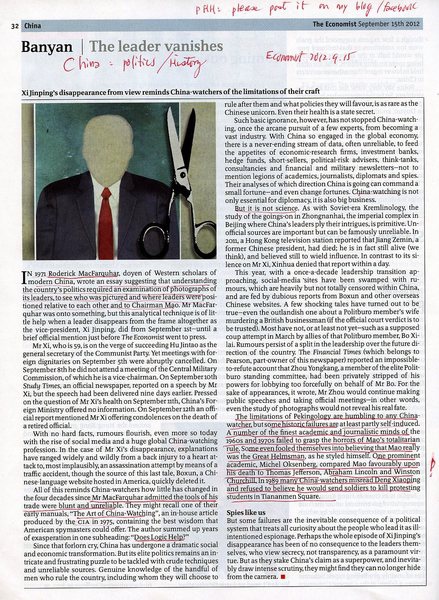 Chong-Pin Lin’s Note: Negative campaigning is nothing new to politics. It had existed two thousand years ago in the Roman Republic, and was adopted by the famous orator Marcus Tullius Cicero. He is known to us as the one who conquered his stuttering by practicing public speech on the beach with a pebble in the mouth.

What happened to Cicero’s election campaign? He won. But his rival who apparently refused to accept the result took to armed rebellion and was killed in battle. Cicero, two decades later, was also killed in the civil wars. And the democracy became dictatorship, while the Roman Republic was replaced the Roman Empire.

A reminder: In 2008, Barack Obama refused to engage in smearing campaigns. He only pushed back when attacked by his opponent. (May 15, 2012) 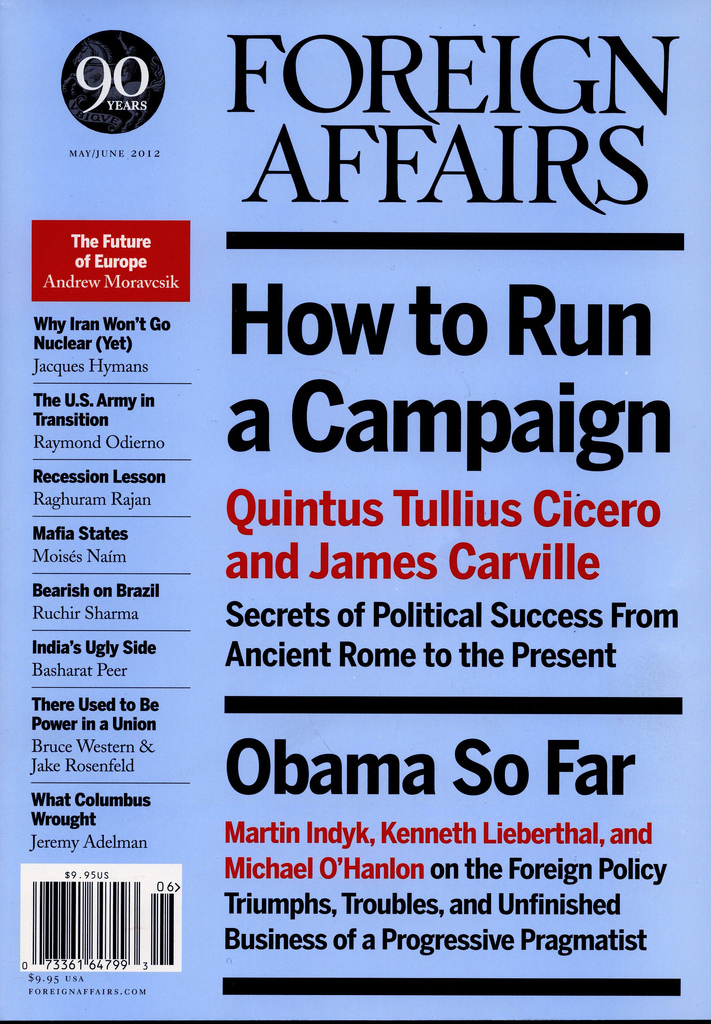 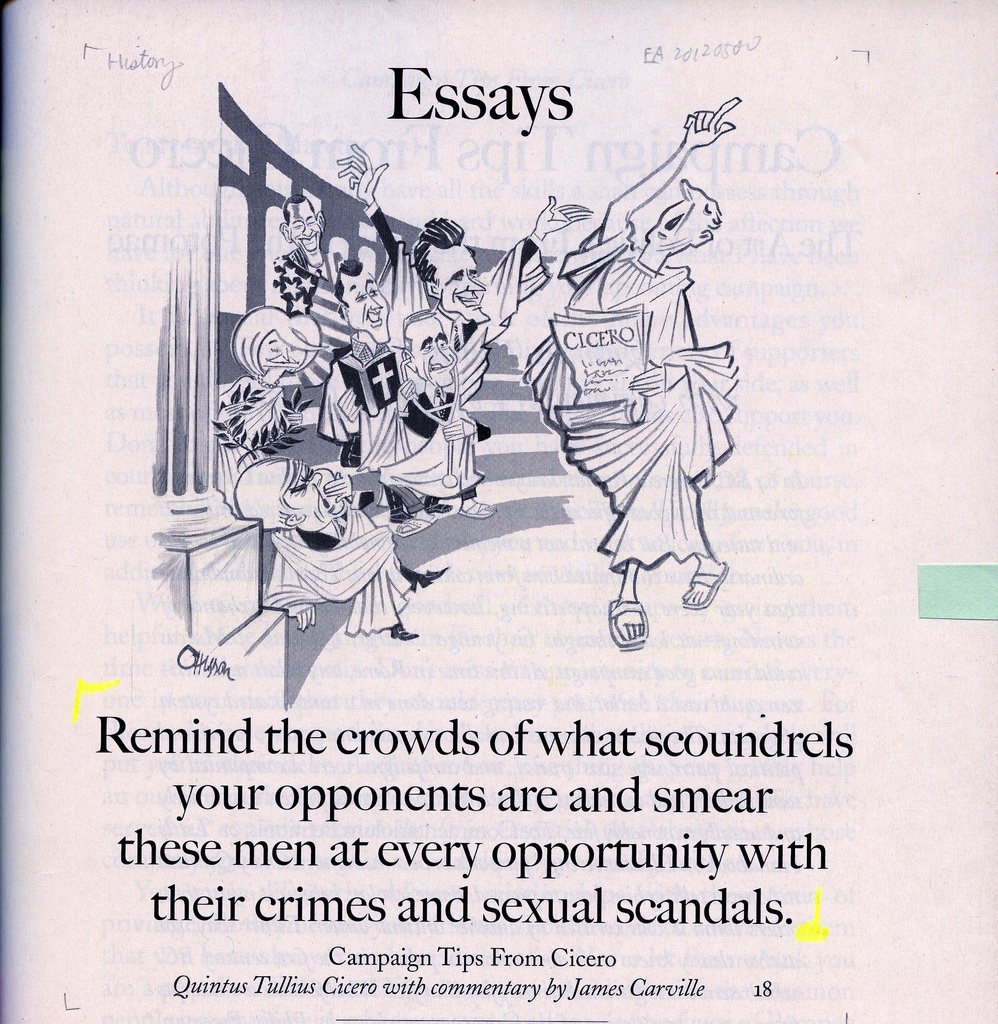 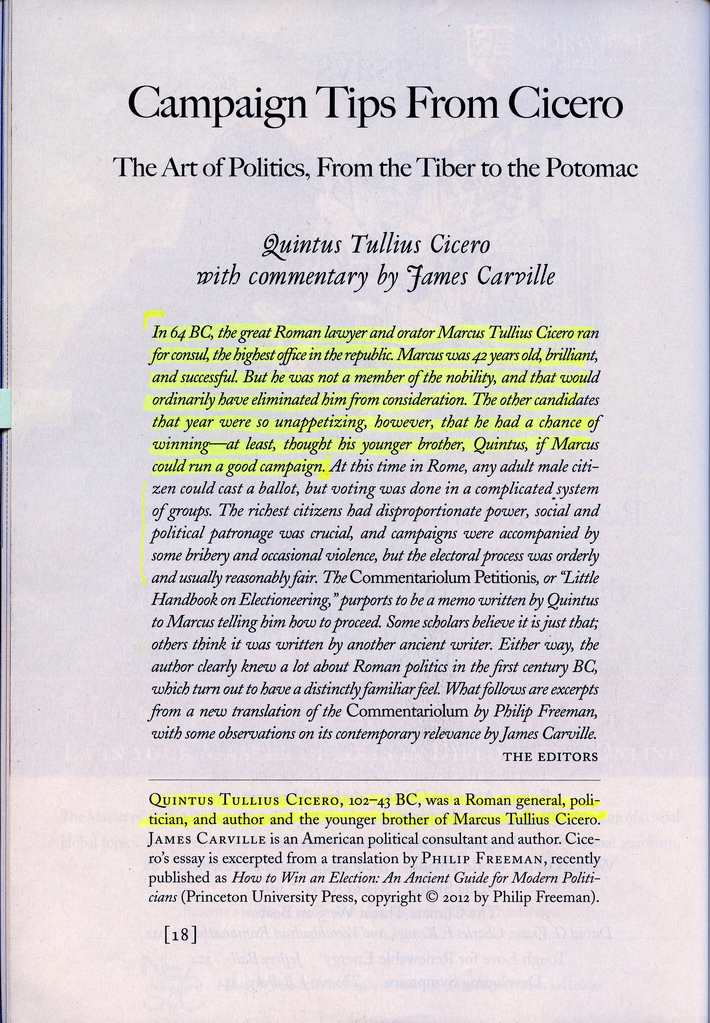 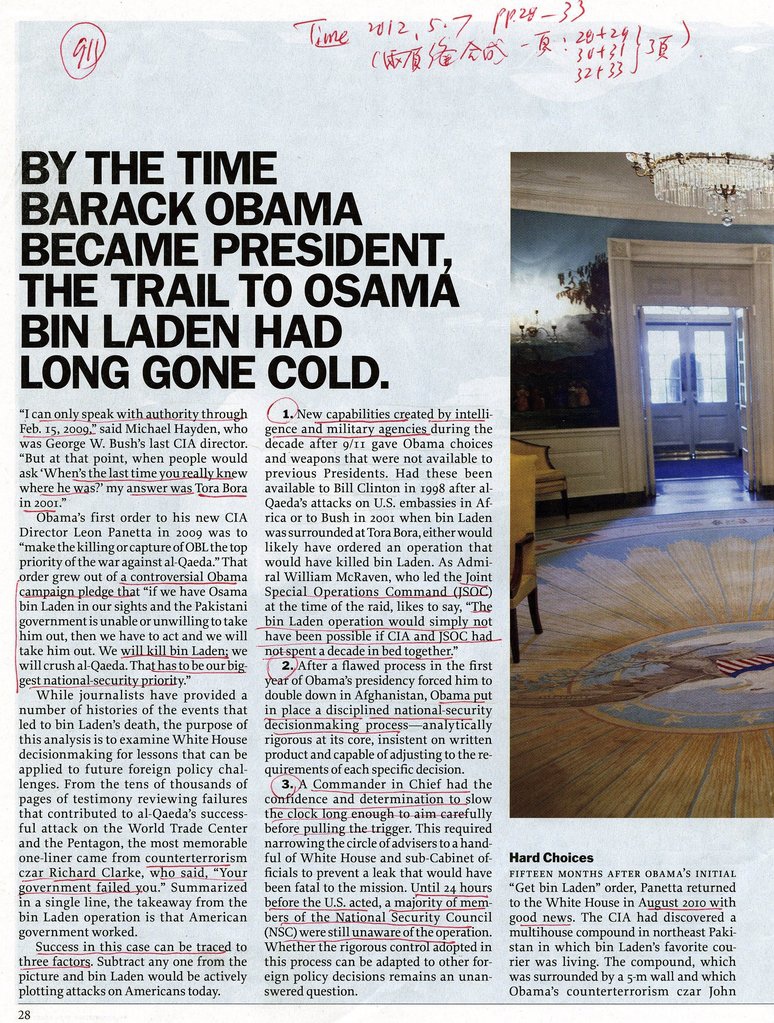 Chong-Pin Lin, "Beijing and Taipei: Dialectics in the Post-Tiananmen Interactions"

20120323The Chinese Communist Party and Its Emerging Next-Generation Leaders 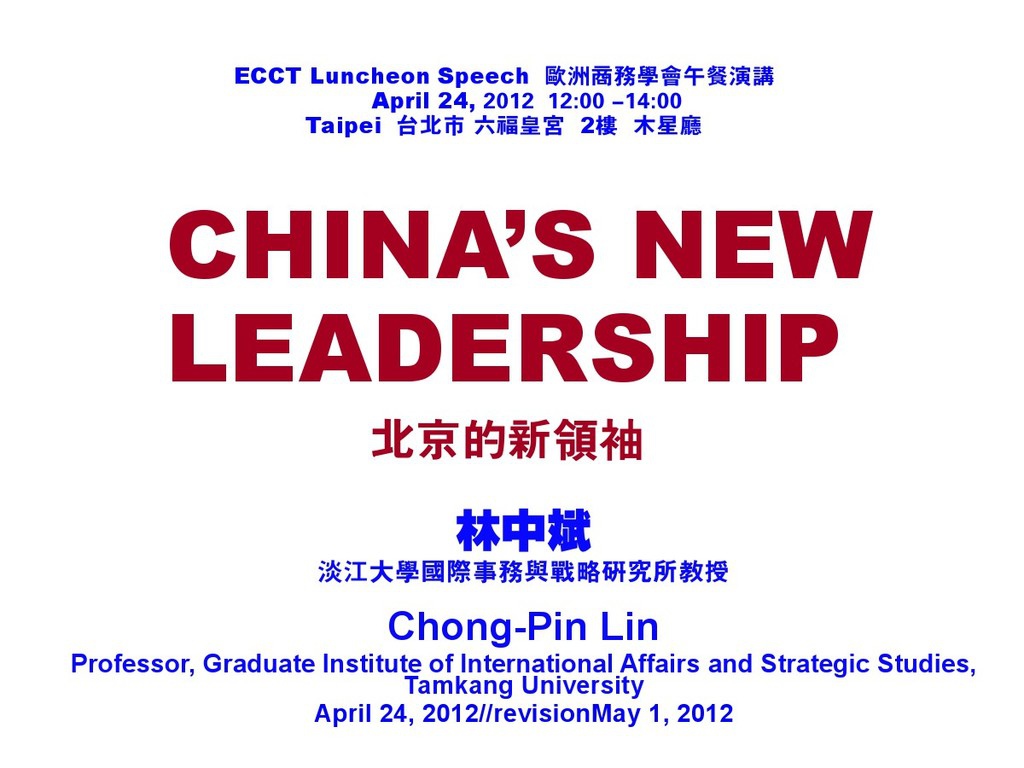 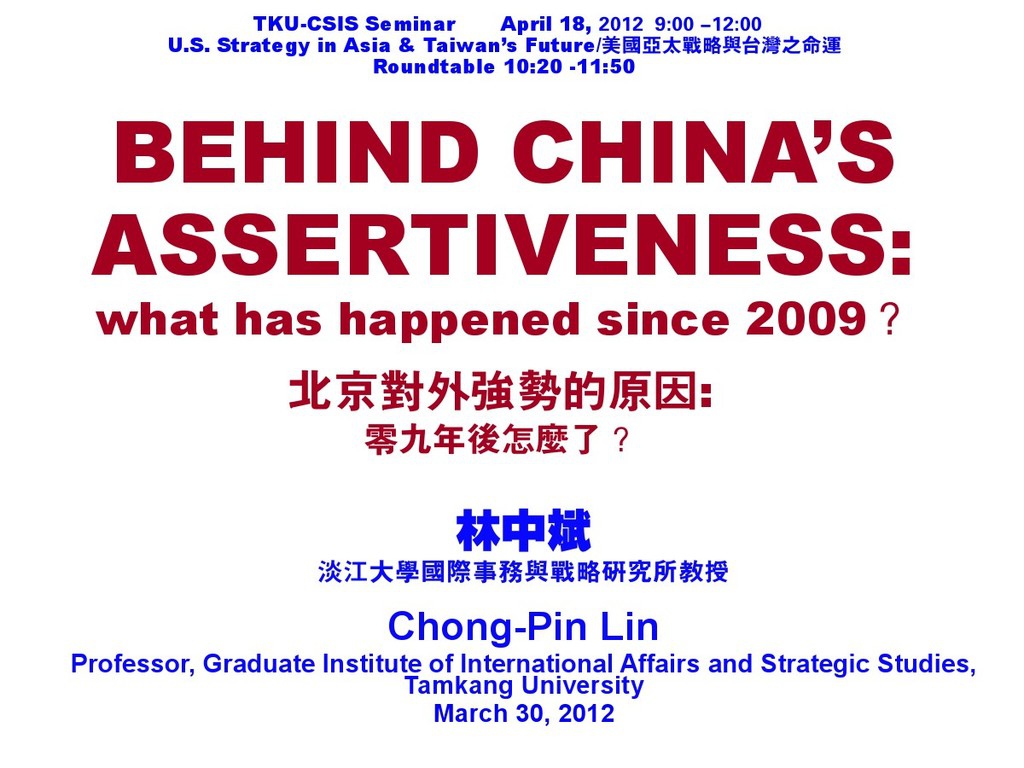 Attention:To students who major the course of  PRC Foreign Relations 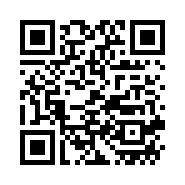